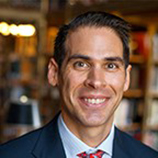 Mike Fontaine wears two hats at Cornell, which he joined in 2004. As a Professor of Classics (the fancy name for the study of ancient Greece and Rome), he investigates Latin literature from ancient Rome through the Renaissance. His special interest is jokes, and he enjoys teaching students to speak Latin, which he learned to do from a papal secretary in Rome 20 years ago. Every other year he co-teaches a popular undergraduate course on Wine Culture, with tastings in every class. As Associate Vice Provost for Undergraduate Education, he does everything he can to improve undergraduate learning in classrooms throughout the University. He holds a BA from Millsaps College in Jackson, Mississippi, and a Ph.D. from Brown University, both in Classics. He lives in Ithaca with his wife, Alyssa (JD '06), who Executive Vice President and General Counsel at Tompkins Financial Corporation, and their two children.