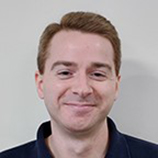 Jason Hungerford has volunteered with the Cancer Resource Center of the Finger Lakes (CRC) since his colorectal cancer diagnosis in 2010. He facilitates the Young Adult Support Group and the Colorectal Support Group at CRC. He also serves on the CRC Board of Directors. Jason has been highly involved in the award-winning collaboration between Cornell University and the Cancer Resource Center from its beginning planning stages to its present-day growing partnership. He especially enjoys interacting with Cornell's cancer scientists and cancer research students. He co-taught a Cornell Freshman Writing Seminar class called 'Dimensions of Cancer' during the spring 2017 semester. He is a frequent speaker at various Cornell functions and has participated in many classroom panel presentations throughout the Cornell campus. In addition to his work at CRC, Jason is actively involved in the LGBT community in Ithaca. He served as co-chair of the Ithaca LGBT Taskforce 2004-2010. In 2004, he and his late partner were lead plaintiffs in the Ithaca 50 marriage equality lawsuit, and the two were instrumental in New York passing its marriage equality law in 2011. By profession, Jason is a web developer and general IT consultant and owns a small web hosting company in Ithaca. He has lived in Ithaca since 2002 and loves being a part of the thriving community and all it has to offer.