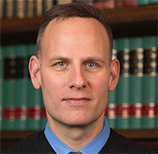 Previously he was a litigator with Holmberg, Galbraith, Van Houten & Miller, where he specialized in felony criminal defense. He has tried numerous cases including several local high profile murder cases. He was an adjunct law professor at Cornell Law School from 2003-2011.

Judge Miller received his B.A. from Cornell in 1990 and J.D. from Cornell Law School in 1995. He is a past president of the Tompkins County Bar Association.